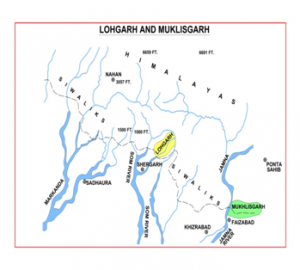 Historians wrongly quoted that the earlier name of the Fort Lohgarh was Muklishgarh, the Rang Mahal of Mughals. Mukhlisgarh was simply projected to hide the history of Fort Lohgarh which was constructed by the naves to uproot the long oppressions rule of Mughals. Under Shahjahan (1627-1658) the celebrated Ali Mardan Khan laid down Rang Mahal named Muklisgarh and in it built a royal hunting lodge known as Badshahi Mahal – pleasure palaces on the left bank of Yamuna to the north -west of the Faizabad Pargana in the Sarkar of Saha-ranpur presently in the state of Uttar Pradesh near famous Hathani Kund Barrage. The palace is situated opposite to the head works of the Delhi Mughal canal and its many portions were standing till the beginning of the present century. To the name of same nobleman is drawn the construcon of the canal. He is said to have designed the canal which was conducted with a considerable knowledge of hydraulics along the crest of the high ground between Yamuna and Hindan so as to admit of its water being thrown off on both irrigation purposes. Geographical location of Muklishgarh was in the pargana of Fahizabad, Sarkar Saharanpur, on the bank of Yamuna river. It also lies in the proximity of Shivalik Hills and the location of Muklishgarh made it very suitable from a climate point of view.

One of the important known facts of the Muklishgarh was that a number of passive cooling techniques to factor in the intense heat prevalent in North India during the summers. Some of the most notable features of this strategy include Jaalis walls with high thermal mass (thick walls) river side Yamuna & its waterways, cross venlaon, relavely smaller windows, blank walls, courtyards, gardens and so on and henceforth. The Mughals used ingeniously to their advantage the natural water resources present at the Muklishgarh. Total area of Muklishgarh is 45 acres and Rang Mahal building covers area between 1.5 to 2 acres only. Presently it is a protected site of Archeological Survey of India and ASI has spent about Rs. 2crores for renovaon of the building (Badshahibag)