In early 16th century Guru Nanak Sahib made several visits to South India and established Sikh Sangat in various parts of present Karnataka, southern Maharashtra, Telgana, Andhara, Tamil Naidu and Kerala. During this era this region was under the control of Bahmani Kingdoms (Bidar, Bijapur, Golconda & Ahmad Nagar) and Krishna Deva Raja of Vijay Nagar. Guru Nanak Sahib on his visit to Bidar met Pir Jalaludeen, religious head and after 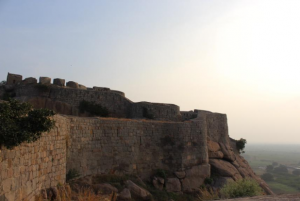 the debate he became close associate of Guru Nanak Sahib and allowed Guru Sahib to establish Parchar Center at Bidar. In 16th century the Mughals were controlling the Northern part of Indian Sub Continent and the Deccan part was under the control of above said Kingdoms. Guru Nanak Sahib visited many areas, towns and villages in South India for preaching Sikhism.  Vanjara Sikhs played a significant role in spreading Sikhism in Deccan. The Sikhlighars were also inhabited a various parts of South India and they made weapons for the Sikh army, since the time of Guru Nanak. One of the panch pyara Bhai Sahib Singh came from Karnataka and he was not only a true Sikh, but also a well trained soldier. He had a great knowledge of Gurmath.  It is worthwhile to mention here that Peshwa movement was working in coordination with Sikh movement. In 17th century this area remained under the control of Peshwas and they supported Vanjara Sikhs, who were involved in militarization of Sikh movement. In late 17th century Aurangzeb took control over major parts of Deccan. In earlier 18th century, the 10th master Guru Gobind Singh Ji met emperor Bahadur Shah at Nander. In 1708, after breach of peace talks the Baba Banda Singh Bahadur was sent to Punjab to uproot the Mughal Empire.  The early history of Baba Banda Singh Bahadur is totally distorted, as there are number of forts on the name of Baba Banda Singh Bahadur in Karnataka. Baba Banda Singh Bahadur’ fort at Koppal Karnataka still exist and there is a large Vanjara population and Sikhlighars population around this fort. Every year on the eve of holi thousands of Vanjaras gathered around this fort and recite the name of Guru Nanak. The famous Vanjaras Jangi Bhangi remained near this fort for number of years. Bhai Lakhi Rai Vanjara and Bhai Makhan Shah Labana had their houses at Hampi (40 km way from Koppal). This clearly shows that the military training of Baba Banda Singh Bahadur was carried out for number of years together in South India. There are more than 4000 tandas in Karnataka and the Vanjaras residing in these tandas are Guru Nanak Nam Leva Sangat. Similarly Guru Nanak Sahib visited Kerala and  Gurudwara Sahib at Kochi marks his visit. There are a large number of sikhlighars population in South India, who are still Sikhs. More research is required to unveil other important facts pertaining to Sikh history in South India.